I’m someone who makes an effort to finish every book I pick up. The Scapegracers by Hannah Abigail Clarke was not one I could finish.

It has been a long time since I’ve put a novel on my did not finish pile, and that is because I usually hold out hope that the story is going to get better. This novel did not and about halfway through it, I faced facts: I would not be finishing this story.

The biggest issue with this novel is the two-dimensional writing and static dialogue. These characters have no substance to them; they flounder in the story that has virtually no plot. There are lackluster personalities and a pitiful attempt to make the novel something good. It has a great premise to it but the dialogue is choppy at best.

It feels as though this story was written by an adult who has no idea how actual young adult talks. The dialogue is dated and fails even more with the poor pacing and lack of personality. There is nothing to draw the reader in, nothing to make the reader invested in the characters.

Then there is the plot or lack thereof. It is not clear what the plot of the story is. It had a good beginning, but it was thrown out, it seems by trying to build up the feministic approach of the story, by the idea that girls need to stick together. A promising idea but it should not have taken away from developing what could have been a great arc to explore. The story is left undeveloped, as it forgets about what happened in the first chapter and waits until half the novel passes to circle back to it.

Unfortunately, The Scapegracers was just not a good novel. I wanted to like it, I loved the premise, but the shallow, two-dimensional characters just failed to keep me invested in the story. 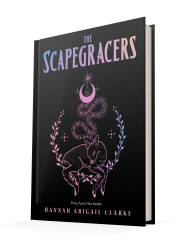