Of Silver and Shadow is a young adult fantasy that offers something unique for the reader. It follows Ren Kolins who has silver, a type of magic the kingdom of Erdis outlawed years ago. When she was a child, the king discovered she had magic and tried to kill her, setting her home on fire. Ren alone escaped and learned to keep her magic hidden, surviving by “sticking to a life of petty thievery, card games, and pit fighting.” She lives a dishonest life, but that is part of her charm.

Ren is the definition of a reluctant hero with a matching snarky personality that gives the readers a bit of fresh air. She is the queen of sarcasm and completely original as far as characters go. However, there is also something heart-warming about this character. As self-indulgent as she is, when Ren cares about someone, it shows strongly. Ren often puts herself first, but the softer side of herself comes alive, it gives Ren a more complex personality. Ren is very much afraid of exposing herself and her power for the rebellion. It goes against all her survival instincts, but she does it regardless, not just for the coin (mainly for the coin), but because she knows she needs to tear down the corrupt regime.

However, there are times when her snarky attitude becomes repetitive, especially when she banters with Darek. Still, Ren is a compelling character at the end of the day.

Much like Ren, the other characters are multifaceted. Kellen is a prince with a heart to good to belong to his family, and he sneaks out nightly to be himself, or at least try to find a place to belong, something relatable to any reader. Adley is a hunter, fashioned by a king she hates, who does horrible things in order to gain her freedom and that of her love, Lesa.

Darek is the only fault because he’s just a self-righteous prick half the time, and while it was evident that he and Ren were going to end up together, the chemistry was lacking. Yes, the development of the story gave it away and gave some development to their dynamics; however, it lacked substance and came off as rushed, making it slightly unbelievable.

Especially when it contrasts the lovely relationship between Adley and Lesa, now that is a relationship worth reading.

For Darek and Ren, their argumentative banter, much like Ren’s snark, became repetitive. It bordered on annoyance because Darek is so self-righteous, insulting Ren and undermining her character.

On the bright side, Of Silver and Shadow moves effortlessly forward. Of Silver and Shadow is a fast read, has excellent world-building, giving depth to the class structure, and the use of magic in this novel. It was thoughtful and had a fantastic ending that lifts the reader with hope and joy.

Of Silver and Shadow 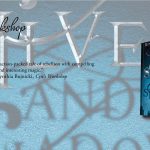