Don’t Call the Wolf is an excellent debut by Aleksandra Ross. As a fantasy novel, it opens and closes so much like a fairy tale that one could start the story with “once upon a time” and it with “and they all lived happily ever after.” That is the beauty of this novel; it has this fantasy that breathes so much beauty and wonder into the story to keep it engaging.

The structure of the fantasy, the opening sequence with the invasion of the dragon and the monster coming from the darkness are mesmerizing. It flows exactly like a fairy tale would flow, no dialogue, just storytelling, giving the world a proper foundation.

Don’t Call the Wolf has excellent world-building, it gives a sound structure to the mechanics and the use of language, the setting and scene structure gives and the novel an old-world edge.

Using her Polish roots, Ross gives this story the old-world edge, using stories she grew up with a foundation to breathe fire into something new.

The dragon, Ren, and Lukasz are all interesting characters and elements that bring the story to life. Ross also brings in this recurring theme that monsters are not only the creatures int eh dark but also humans. There is this idea that there is also duality between good and evil, that every being has this capability of being both good and evil, and it is fear that usually brings out one’s darker nature.

Ross also gives creates wonderful backstory to highlight the growth of Lukasz and building dynamics between him and his brothers. These segments that break up the story are short and thoughtful, giving some history to Lukasz and his culture. Lukasz is a wolf lord, a dragon hunter, so his world is different than the world he is trying to be a part of.

Don’t Call the Wolf is a compelling way to build a narrative and the structure of society. With her clever use of language and folktale, Ross builds this wall within society. The interludes as well showcase the ill-treatment of Lukasz and his brothers. Wanted for their strength, high society continues to look down on them because they are nomadic.

A profoundly thoughtful novel Don’t Call the Wolf is a fantastic debut for anyone who loves fantasy, fairy tales, and magic. 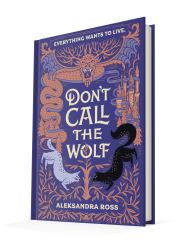