An emotional read, Watermark by Elise Schiller, captures the times in this evocative novel, following the disappearance of a young girl living in a troublesome neighborhood and a complicated home.

Watermark was certainly not something I would pick up on my own; I tend to go more toward fantasy when it comes to stories. However, I never turn down a recommendation. Furthermore, it was impressive.

It was a unique way to approach the story Schiller executed it well. Jeannine and Alex have distinct voices, and each perspective gives depth to the story, influencing how the reader sees Angel.

Getting to know Angel

Angel is a headstrong character; she is practically the mother of the household, often keeping the family together. Her mother had her at 15, so there is a lot of resentment there, and her mother is jealous of her as well. Pic, her mother, is jealous of the chances she has in life, of how thoughtful she is, how her children prefer Angel rather than their mother. Pic is a disaster of a person; she is a recovering addict with a husband who has a sketchy side business. It is an unsafe household, and Angel is the core, she is the safety net.

Schiller goes back and forth from the past to the present to show the reader who Angel is and what may have led to her disappearance. The revelation, both startling and horrific, impacts the reader, enticing a second read to see all the hints the author dropped.

Watermark is an emotional read; it captures the turbulent times of the early 1990s, highlighting some of the struggles many faced. By following Angel through the eyes of her sister and friend, the reader is drawn into the drama and tension, relating to Angel as she struggles to save herself and care for her sisters. 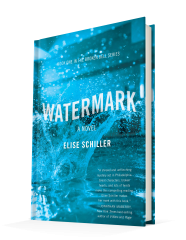