An incredible piece of work by Laura Bates, The Burning creates a thoughtful narrative of a girl bullied and shamed.

The Burning is a Strong Feminist Read

A powerful novel The Burning follows Anna, forced to move due to bullying. Her mother packed them up and moved them to Scotland, reverting to her mothers’ maiden name. Anna tries to put the past behind and make new friends, but the past returns and the bullying starts again. Anna’s only escape is a history project that lures her into the past of Maggie, a young woman whose story resembles her own and who was burnt at the stake for her “sins.”

The Burning says much about the treatment of girls. Anna made a mistake; she took pictures of herself for her boyfriend. There was some peer pressure there from her boyfriend, but ultimately, yes, Anna should have been smarter about it. However, she is a teenager and I do not think that any of us can look back at our past with ignorant innocence.

However, her mistake does not justify her friends to abandon her, it does not make her a criminal, and in no way excuses how she was bullied and mistreated at school and online. No one ever “asks for it.”

It is beautiful how Anna’s mother is by her side through it all, presenting a strong family unit that should resonate with the reader. It is remarkable and sends a powerful message to readers. Their relationship has its ups and downs, but they remain united through it all. Anna’s friendships also highlight how strong peer pressure is. Her old friends cut her out instead of standing by her because it was “just too hard”, while her new friends stick by her through it all. It sends a powerful message on female unity and how women, both young and old, should stand together instead of apart.

Bullying is a tough subject, but it is not hard to deal with, and the approach of turning the girls into the criminal instead of dealing with the matter highlights much about society. Often it is easier to ignore the problem rather than deal with it, but easier does not make it right.

Bates includes a powerful scene where the Dean is suggesting expelling Anna for her past actions. That would be the easy solution because Anna is the target of the bullying. But when Anna’s mother stands up to the dean and accosts him verbally and eloquently, proving that it will not solve anything, that these young adults need to learn that their actions are not okay, it makes an impact on the reader.

As for the fantastical aspect of the story, mirroring back to Maggie highlights how long injustices have been going on. Women have been mistreated and criminalized for so long, and Anna sees that. She sees that her mistakes do not define her and instead stand up for herself and girls like her. It is an empowering moment for her readers and an empowering moment for girls everywhere. 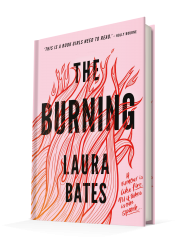 2 thoughts on “Review of ‘The Burning’”