Amazing novel. Seasons of the Storm by Elle Cosimano is a compelling retelling on the tale of Jack Frost, tying his legacy to Greek Mythology fantastically.

Splitting between Jack of Winter and Fleur of Spring, the passage of time is captured beautifully. As the physical embodiments of the seasons, they are caught in the vicious cycle of being killed by the season that comes after.

Going back and forth between the characters and their seasons, Cosimano does not lose the pacing. She captures the passage of time beautifully with the right amount of detail so that the story neither falters nor drags.

However, for Jack and Fleur, they want more than to be prisoners caught in the vicious cycle. They want to be free, and to do that they have to escape and find a way to survive outside of their prison. Together with Julio of Summer and Amber of Autumn, they hatch a high tension plan. In doing so they achieve the impossible and the powerful magic they have within them.

Action-packed, the story follows the tension as Jack and his friends escape. Together they travel the globe in the hopes of bringing out the end of Chronos’s tyranny.

The story is fantastic. By incorporating Greek Mythology, Cosimano creates interesting tension and dynamics. Gaia and Chronos make interesting antagonists to Jack and his companions and it offers something new and unique. It is a fresh way to bring to life Greek mythology and interpret it by combining it with the tale of Jack Frost.

As for Jack and his friends, Cosimano develops them wonderfully. Fleur comes along the way from who she was at the beginning of the novel. As the embodiment of Spring, she has such a powerful connection to the Earth and with it comes so much power. Evolving from meek to fearsome, she tells the boys that she does not need them to save her, becoming the savior. Fleur comes into herself brilliantly, becoming this fearsome and thoughtful character.

The same happens with Amber and Julio. While the reader never gets to see their point of view, the story still reveals their evolution through their narrative and dynamics. Amber and Julio come along way from who they were, much like Fleur and Jack, reflecting on their pasts and their memories. They want to reconnect with the world they are kept from, from the humanity around them. Together they do, finding that spark of humanity within themselves to become the driving force of rebellion this novel needs.

Overall, Seasons of the Storm is an incredible read. Moving at such a great pace, the character development and dynamics will entrap the reader in this new take on Jack Frost.

Seasons of the Storm 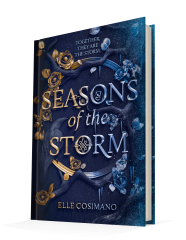 One thought on “Review of ‘Seasons of the Storm’”