A Curse of Gold by Annie Sullivan is the second novel in her Touch of Gold series. The first book was excellent, you can see the review here, but this novel surpasses its because it delves deeper into Greek Mythology.

In this story, Dionysus is invading the Kingdom of Midas. His goal is to stop the prophecy from coming true so that he can win a bet and reawaken the Titans. To do this, he has to kill Kora.

However, what makes A Curse of Gold stand out is the inclusion of the Greek Gods in this novel. The Gods were not prominent in the previous novel, only mentioned in passing, but Sullivan has made them more tangible to the reader and the characters.

Sullivan has imbued the story with more magic this way, not only by including the Gods but other figures such as Satyrs, and the Oracle, giving readers a story that is more reminiscent of a Greek adventure.

There is a little more fantasy in the novel with the inclusion of the Gods and these mythological figures because there is more magic. Yes, it is still an adventure story because Kora and her friends have to embark on this journey to find Gods and a mystical floating island while also learning more of themselves in the process.

The magic of the storytelling keeps the momentum and pace of the story steadily moving, growing, building up to such an incredible adventure filled with addicting magic and fantasy.

It was fun to see the Gods bought to life in this novel. Triton especially made an excellent addition to the group. Sullivan once again reminded readers of her strong talent with characterization because she imbued Triton with so much personality making him relatable to the reader.

Bringing back the cast of characters from A Touch of Gold also adds more tension to the plot. These characters are still reeling from the events in the previous novel, creating much tension between them.

Most of the tension arises between Kora and her cousin. Once again, her cousin shines in this novel, and the two have switched roles, balancing each other out perfectly. Kora is more outgoing, no longer hiding because of her skin while her cousin hides away.

However, what makes their role reversal different is the cause and effect of the previous novel. Kora is strong-willed and confident while her cousin is drowning in her rage, grief, and sorrow. She was always a headstrong character, so seeing her energy highlighted in a new way creates much turmoil, adding depth to the dynamics of the plot.

While their dynamic was central in the storytelling, all the character dynamics are not lacking. There are so many emotions going on between the characters, adding depth and growth to them as individuals.

These characters are all dealing with the pain from the previous novel in different ways, and the introduction of new characters such as Lenny and Triton, give the dynamics more richness. They give more layers to the character dynamics, ultimately making this a story as much about the characters as it is about the adventure.

A Curse of Gold is a brilliant sequel and conclusion to this imaginative retelling of the tale of King Midas. There is so much imagination and creativity that has gone into this novel, and with strong emotions driving the characters forward, the reader will be hooked from beginning to end.

A Curse of Gold 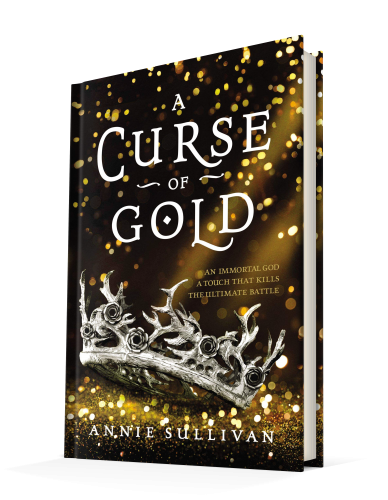