Incendiary is the start of a new series by Zoraida Córdova, inspired by Inquisition Spain; this fantasy follows Renata as she struggles to face her past and find her identity.

Córdova is a talented writer, but what makes her stand out is her ability to imbue her storytelling with Latinx culture. As a Mexican reader, it only serves to make the story more engaging and thoughtful.

The reader can hear the Latinx culture in the names, the texture of the setting, and the tone of the world-building. Córdova makes it easy for the reader to draw comparisons between her story and the Spanish Inquisition. All anyone has to do is pick up a history book.

In this novel, the crown is hunting anyone who is a Moria, someone who has magical abilities. However, if the crown comes across a Moria they deem helpful to them, they keep them alive, which is what they did to Renata as a child. Kidnapped her, brainwashed her, spoiled her, and used her abilities to turn people into living husks as she steals away their memories.

It is an intense story that follows Renata through turbulent and emotional times. Incendiary is a high-stakes novel with excellent rising tension from beginning to end. It has the depth to challenge and engage the reader to think as Renata struggles through the lies and secrets to face evil men and corrupt governments.

Renata drives Incendiary forward as she comes to grips with her past. Although the Whispers, a group of rebels working against the crown, saved her, she is still not trusted. It makes the reader feel for her because she was a child who had no idea what her power was doing, and yet, her power is what makes her feared from all sides.

Growing up surrounded by hatred, mistrust, and grief for the pain she has caused makes Renata put up this wall around her. She is an easy character to sympathize with because she only seeks to bring down the crown, even if it means sacrificing herself.

Her gift of memory stealing also creates much tension in the story as well. For Renata, the memories go towards her, living forever within her. Renata has never been sure of who she is because she has all these memories that are not hers swimming around her head. So it forces the story to be as much about rebellion and the fight for equality as it is about Renata struggling to find her identity. However, her past is filled with so many lies and secrets that it is not an easy journey.

Nevertheless, that makes it so compelling for the reader because it is unpredictable, and the reader understands and sympathizes with Renata.

Incendiary is an excellent start to a new series. The writing, world-building, characterization, and structure make the novel engaging from beginning to end. 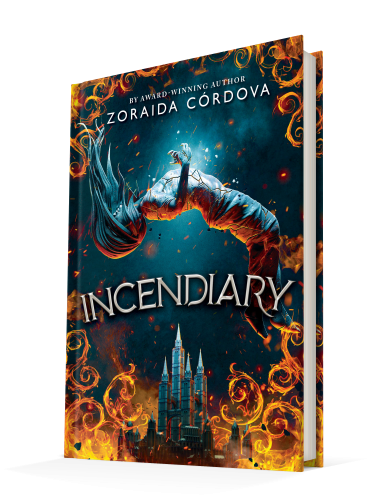