Hello, Cruel Heart gives readers a look at Cruella, before the latest movie, highlighting 1960s London and life for a struggling 16-year-old girl.

One of the more exciting aspects of this novel is that Cruella exists as a manifestation of Estella’s negativity. This concept is interesting because it gives Cruella a chance to be relatable to the reader before she turns into the villain everyone knows her.

Estella lives on the street with Jasper and Horace, obsessed with fashion. A thief by day, she wants nothing more than to be a great fashion designer. However, when a chance encounter puts her in the world of the rich and fabulous, Estella finally has a moment to achieve her dreams.

However, it puts her at odds with Jasper and Horace, and Estella’s dark thoughts, Cruella, begin to change her personality.

This change, this development, highlighted in her internal narrative, the way she talks to herself and challenges herself gives readers a deeper insight into her characterization. The reader understands her passion and drive; they understand Cruella as another personality, her darkness, and see where it comes from.

The creation of Cruella gives the narrative a firm footing for future development into the villain everyone knows her as.

Johnson wrote a good story, but it feels like it could have been more. No, one does not need to have seen the Cruella movie in order to understand this novel. So whether your liked or hated the movie, this book stands apart from it.

It had a solid familial aspect to the story as it focused on building up the dynamics between Jasper, Horace, and Estella, which gives their relationship more depth. No longer are Jasper and Horace just hulking minions for her to boss around. Instead, here they are, her brothers’ people who accept and love her just as it is. They understand her without her needing to explain herself. She only has to say “clothes,” and they get it.

Nevertheless, that is where the depth ends. Johnson built up the scene of 1960s London wonderfully, and while she touches on the differences of class status, she could have done more.

The reader sees Johnson’s attempt between Cruella and her newfound friends. They may be higher class, but the way they look at the world, how they are flippant and ostentatious, and how they treat Estella as an accessory rather than a person gives the reader something to think about. I just wanted more from it. I wanted Johnson to delve into those social injustices more to give the story more depth overall.

Hello, Cruel Heart is a quick and easy read. It focuses on giving Cruella de Vil a strong foundation that does make her understandable for the reader while also building the foundation for the future Disney villain she becomes. 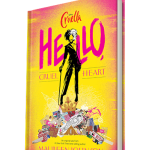