Aetherbound follows Pendt in this slow-burn space opera that gives ownership of one’s body back to women and holds up the ideals that a family is not born of blood but born of love.

Broken up into parts, Johnson gives Aetherbound a strong foundation. Opening with the history of the world, Johnson introduced readers into a world of space travel and science mingled with magic. It is fascinating and unique, giving the story a firm footing.

Aetherbound is able o ground the reader in the details, in the coldness of space travel, and the corruption of government for power and space dominance. Different skills make some more or less valuable. For Pendt, being a gene-mage makes her less valuable in the eyes of her family on the ship the Harland.

Admittedly, the pacing part one is a bit slow. However, despite the slow pace, the reader is drawn into the narrative. Through Pendt, the reader is experiencing the coldness of space, how the women on the ship lack ownership of their bodies. The reader sees how their government enforces the idea that they have to have children to run the ship. It is a cold and heartbreaking view of the world, but the way Johnson tackles the argument of ownership of one’s body is impactful because it has roots in realism.

Pendt could be read as stiff, but when the reader reflects on her cold upbringing, how she was given just enough calories to survive daily and nothing more, the reader understands her.

And Pendt grows. Once she is on the station and meets the Brannick twins, her life changes, evolving both her and the story. Ned and Fisher are twins who want to help bring about a revolution but in different ways. Moreover, together they grow into this strong family unit. Pendt marries Ned to stay on Brannick station and remove any claim her family would have on her, and soon discovers they a family is more than just blood.

Aetherbound is a slow burn novel, but the ideas, the passion, draw in the reader. Coupled with the powerful messages, Aetherbound stands out from the crowd and reminds readers that we all have a right to control our bodies and that our family is not only determined by blood but can be one made of love and acceptance. 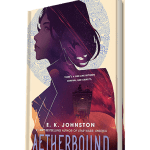 0 thoughts on “Review of ‘Aetherbound’”