Winner of the Book of the Month title on Cyn’s Workshop, A Dragonbird in the Fern follows Jiara on a journey of finding her inner strength as she tries to solve her sister’s murder in a foreign kingdom.

Rueckert did an excellent job of bringing Jiara to life and making her relatable to the reader. She makes it clear that Jiara has dyslexia, and this makes her think poorly of herself. Anyone who struggles with academics or reading will be able to relate to her because of her insecurities.

Jiara’s resilience and perseverance make her this compelling character eager to serve and protect. Slowly, she overcomes most of her insecurities and does many amazing things like saving her new kingdom and solving her sister’s murder.

A Dragonbird in the Fern is also a good story. Admittedly, the opening chapter is a bit slow, the pacing feels off, but the mystery surrounding her sister’s murder and the tension of the King’s arrival gives the reader something to grip onto.

Before the story starts, Jiara’s sister has been murdered. In her land, when someone is murdered, their spirit because an Earthwalker, a vengeful ghost who will harm loved ones until their murder is solved. So Jiara is trying to perform a ritual to ease her sister’s suffering until her murder is solved when King Raffar, her sister’s betrothed, arrives.

Now Jiara marries him. It is not as off-putting as it sounds because these two characters were immediately attracted to one another, and Raffar is charming and respectful. He agrees to marry her, but doing anything more before she is eighteen would be blasphemous for him. Raffar is one-hundred perfect respectful of her, even asking her privately if her mother is forcing her to marry him, assuring him that there does not need to be a marriage to form a tie between their countries.

It lays down an excellent clean development to their dynamic as they grow as friends and even a couple. They listen to one another, and they come to respect one another before moving on to more intimate parts of their relationship.

While Jiara is overcoming her insecurities with learning a new language, she is unraveling her sister’s murder while connecting to the Watchers, gods from her husband’s land. It is a noteworthy bit of mythology that Rueckert inserts into her story to keep the fantasy alive throughout the plot.

A Dragonbird in the Fern is an appealing novel. It has strong characterization and good plot development to keep the reader engaged.

A Dragonbird in the Fern 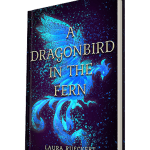