Lost in the Never Woods gives readers a unique retelling of Peter Pan that will haunt the reader with its twists, turns, and jaw-dropping revelations.

Lost in the Never Woods follows Wendy five years after she and her brothers disappeared for six months. However, only Wendy came back. Already this sets the stage for a unique direction of the story because kids are going missing, and Wendy has no idea what happened in those six months she was gone.

Everything is tied to those six months, to Wendy. Lost in the Never Woods is a mystery, but it does not lose that fantasy that marks it as a retelling. Thomas did an excellent job of blending these two genres – mystery and fantasy – to make this a compelling story for readers.

Now, the opening pacing is slow, but Thomas is creating the world and history. Thankfully it is not all thrown at the reader but instead focuses on giving the reader a clear understanding of who Wendy is on her own and what is going on in her home. So again, the pacing is good; it builds wonderfully, raising that tension and creating an unpredictable story.

Just thinking about that ending still blows my mind.

There are some things that Thomas could have worked better to bring to life the characterization and character dynamics.

When it came to the Darlings as a family, I was not as attached to them as I had been in the past, and that was due to language and dynamics. When John and Michael did not return home with Wendy, they became a broken family. Now that is understandable for them to be a fractured family. However, the word choice often made it seem as though Wendy was afraid of her father. The way she avoided him, the word choice of when they did interact, almost made it seem like he became an abusive man rather than an emotionally detached father.

Now, given the context, we as readers know that not to be true. The context reveals, as said above that he is still drowning in his grief and anger of losing two out of his three children.

Thomas did an excellent job of building up the dynamics between Peter and Wendy, but the execution could have been better when it came to the Darlings as a family.

Lost in the Never Woods may have its faults, but it holds its own with amazing twists and turns and a bittersweet ending that will stay with the reader as a retelling.

Lost in the Never Woods 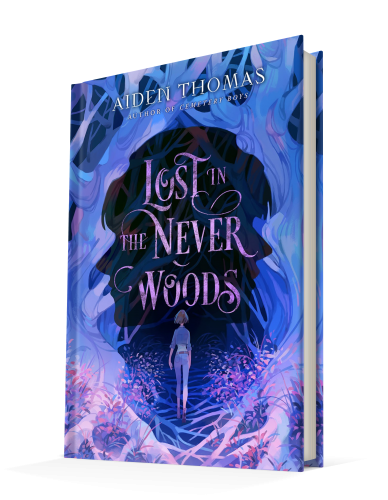