Traci Chee’s A Thousand Steps into Night is an incredible Japanese-inspired fantasy that sends one young girl on a quest to remove a curse, allowing her to explore her freedom in the process.

First, let me begin by saying I love Chee’s writing and storytelling. I think she is fantastic at what she does because she creates such interwoven stories that make the reader think.

A Thousand Steps into Night follows Miuko, who lives in the realm of Awara. In this realm, demons and monsters roam the roads at night, and magical barriers are kept around towns to keep them safe. One day, on her way home, she is attacked and cursed by a demon, forcing her to embark on a quest to remove the curse or turn into a demon.

The journey Miuko goes on is extraordinary. She makes some incredible friends, including Geiki, a magpie spirit who becomes her best friend and confidant. But her journey examines her society. Awara has a very restrictive society. Women must always have an escort and should be seen and not heard. There are no other genders other than male or female, And what I like about that is that it mirrors this discussion we are having in today’s society.

Miuko’s journey is part of what makes A Thousand Steps into Night an excellent story. Miuko slowly breaks free of the bonds society has placed her in on her journey. In doing so, she can connect to other female characters in the narrative who feel confined and restricted by society’s standards. Miuko gives them a voice, and by giving them a voice, she gives herself a voice as well. She’s always felt out of place in her world. Her journey allows her to love herself except herself and contradicts culture that says she’s nothing more than a woman as if being a woman is a bad thing, as if being loud is a bad thing.

Chee’s writing is excellent. Chee addresses today’s discussions, but while doing so, she never breaks the story’s pacing and focuses on building up those powerful character dynamics.

There is something to be said about these character dynamics. Even with the demon, the reader feels this pull of attraction, the same lure Miuko feels towards him. He is a villain, but he wants to liberate the country. From the previous regime that was more open-minded than the current, while driven by anger and revenge, he makes some excellent points. And in his twisted way, he cares for Miuko, constantly encouraging her to accept herself. While he wants her to accept the demonic version of herself, Miuko’s narrative pushes her towards loving her humanity. So by the end, the reader, in part, wants him to redeem himself.

The dynamic between Miuko and the demon prince is strong, but the dynamic between Miuko and Geiki is even stronger. Geiki is a fantastic character staying by her side throughout Miuko’s journey. He is funny, charming, and charismatic, stealing every scene he’s in just like he steals everything shiny on the ground. Geiki is, hands down, one of the best characters in the novel.

The one thing that probably did not work for the novel was the footnotes. I am not a fan of footnotes, finding them distracting as they take me out of the storytelling. The footnotes, for me, were unnecessary because I think Chee uses enough context clues to give the reader an idea of what the word or phrase in Japanese means in English. I stopped reading the footnotes early on and was not hindered in understanding the story, so I strongly believe a glossary would serve the same purpose.

Overall, A Thousand Steps into Night is an incredible novel. Chee is an excellent author. Her storytelling never falters; she astounds with jaw-dropping moments throughout the story and focuses on building up strong characters and character dynamics.

A Thousand Steps Into Night 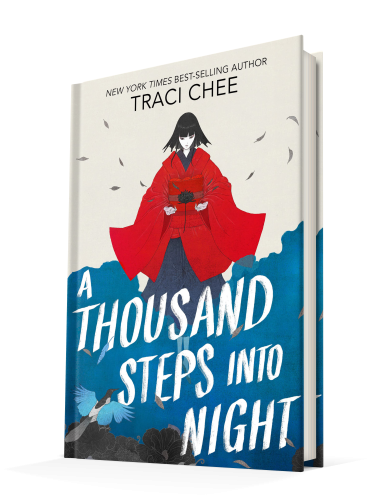