No Filter and Other Lies gives readers a thoughtful narrative of life being a teenager throughout the social media takeover and how there is more to life than online likes and followers.

No Filter and Other Lies is such a relevant novel. It follows Kat Sanchez, an aspiring photographer, who deals with the shortcomings of her Instagram. Kat is obsessed with her Instagram count and, throughout the story, compares her follower count to everyone around her. She lives by these numbers, even becoming inwardly resentful that her friends have more followers than herself and bitter that someone who once had the popularity Kat craves would just give it all up.

This is when she makes up Max Monroe.

The story provides an important lesson of what it means just to live online. Unfortunately, Kat becomes so invested in her online follower count that she lets it become her life. However, it is easy to understand why.

Kat’s family life is complicated. Her parents had her when they were teenagers, then one year later had her brother and moved out of their parents. However, they forgot one thing. They left Kat, leaving the raising of her to her grandparents, who are, honestly, the best people in the world. They are understanding, thoughtful, and loving beyond measure.

However, Kat’s mother instilled this in her, asking her to lie about living with them, making her feel less than loved. She has a room at her parents’ house, but it is one she never uses. And while her grandparents love her, the sense of abandonment Kat has always felt has leaked into her life, driving her need to be more and get more online.

Kat forgets that there is more to life than just social media, that her worth is not dependent on it.

Given the story’s many routes, the flow and storytelling remain cohesive. The core of the story is about a girl who feels abandoned by her parents that she has to find love in the number of followers she has. This was realistic because being a teenager is tough, and we’re still trying to figure out how to love ourselves. Sometimes it is easier for some, and for others, it is hard. And with social media being such a massive part of our culture, we tend to put a lot of value and stock in those numbers of subscribers, followers, and likes.

It is such a relatable story about a girl trying to find herself, connecting to the reader, giving them something to think about. The story is complex, but it moves effortlessly. The different layers of emotion and life integrate to bring out the messy complexities of life and how we mess up, sometimes big time, and how things fall apart, and there is no easy fix.

No Filter and Other Lies is not about easy fixes. It is about loving oneself, finding worth in oneself outside of social media, and finding hope even when everything seems to fall apart. We mess up, but it is never the end of the world when we do; sometimes, all we can do is take a step back, breathe, and go with the flow. Kat does not have a plan for her future, but that doesn’t mean she’s lost. It means she’s still figuring things out, which is okay; it is relatable and messy but fantastic.

No Filter and Other Lies 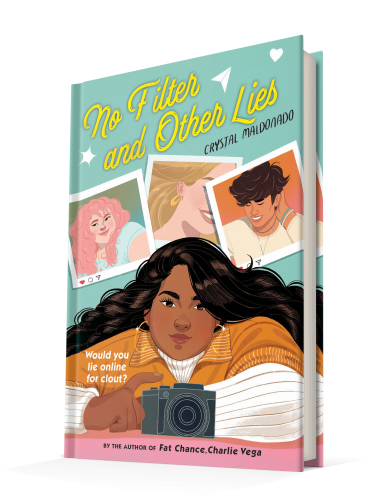