We Are the Fire follows Pran and Oksana; two children who were taken from their homes and fed fire, see the spark of rebellion and decide to fan the flames.

I wish I loved We Are the Fire, but unfortunately, I found it hard to get into. So I began reading this book, having bought it, but I just could not get into it, so I decided to listen to the audio version of the novel. At least this way, it was able to hold my attention.

Now, that is not to say that the story is bad. It deals with complex themes such as child soldiers, abducting children, and turning them into soldiers of war against their will. Pran and Oksana have a depth to their storytelling even while their personalities lack some substance. These two characters want to rebel, freedom, and the cycle of child abductions to end. But at what cost?

That is where the story becomes engaging. Do they become monsters themselves to save others from becoming weapons? There is much debate about what it means to be a monster in the storytelling. Is it worth it to stop the cycle at the risk of their humanity and souls?

Questions like that give the story depth and give the reader something to think about. In addition, it brings to life this question of morality. There is a saying that “to kill a monster means to become one,” but what if that does not have to be the case. That question becomes the debate between the characters as they put their plan into action and feed the flames of rebellion. Their actions and who they want to be are part of the narrative’s driving force.

The story itself is engaging enough to hold my attention, but the characters’ personality is where the story began to bore me. From the beginning, we see a romance between the characters. However, as the story continues, that romance begins to fade. Given the story’s direction, it makes sense as they debate the lengths of what they need to do to lead this rebellion. The push and pull of that romance is grounded, but it is not captivating.

Pran and Oksana were not memorable characters for me. I found their personalities to be bland, unfortunately. There was a lot said between the characters as their plot lines diverged and converged, but it was not enough to make them come alive.

We Are the Fire is not a terrible novel. It has a lot of depth in the storytelling and good worldbuilding, but what it lacks is the characterization in the personality of the characters. For me, they simply didn’t come alive.

We Are the Fire 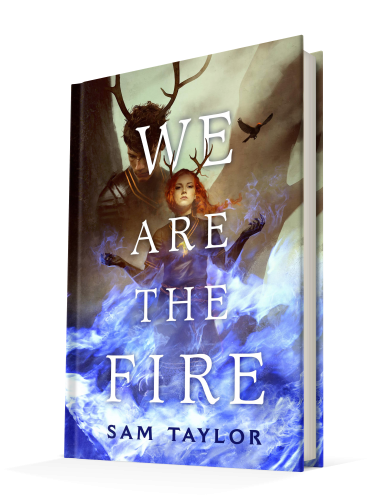