Incredible. Red Hood is one of those novels that is going to stand out for years to come because of all the risks Arnold took in her storytelling.

Firstly, this novel is written, in the majority, in the second person. Usually, that can throw off a reader and put them off because it inserts the reader into the story, it talks to the reader on another level. For Red Hood, it worked out perfectly. Red Hood is a modern fairy tale, a retelling of Little Red Riding Hood. Arnold has already shown that she takes risks, as evident in her other piece Damsel. However, by driving the story forward in the second person and submerging the reading into the narrative, she takes even more risks with her blunt and lyrical way of storytelling.

Other than the narrative choice, which also makes the novel brilliant, is the impact it has on the reader. This is a piece that strongly resonates with the #MeToo movement. The allegory to the predatory behavior some men exhibit is breathtaking. To take it to the point of the men turning into actual wolves hunting those who say no is a compelling narrative and gripping, and to see these young women fight them off and band together in the face of misogyny and sexism is impressive.

Bisou is, however, a hard voice to get behind with the second-person narrative. Yes, the narrative submerges the reader, but it takes some time to connect to her personally because when she talks, she sounds monotonous. Nevertheless, as the story progresses, her voice becomes stronger, which is part of the point. Women’s voices are becoming stronger, they are becoming louder, and through Bisou, the reader can see that they can see how strongly this novel reflects society.

A breathtaking read, Red Hood is a risky novel that Arnold pulled off effortlessly and incredibly. 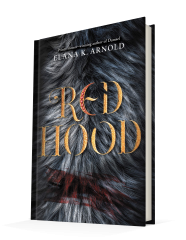