The Seventh Sun is the first in a new YA fantasy based on the legends and history of the Aztec and Maya people.

The Seventh Sun combines Aztec and Mayan folklore and mythology to weave a story unique. That was what probably drew me to this novel, the idea behind it because, well, I am Mexican with Aztec roots so the appreciation of the culture that Forbes was able to create impressed me. This novel reminded me of the film Apocalypto. Nevertheless, the fantastical elements of the novel make it something fresh and give those mythologies a new outlook.

What Forbes does is connect the apocalypse to the self-sacrifice of those with unique gifts. Anyone descendant of those individuals is considered noble blood. So there are many different types of magic in the novel from raising the sun to healing to animal control, which makes the magic in the novel, while not unique, interesting to read. Then there are the sacrifices that govern the people. In these ancient cultures sacrifice was a part of daily life, and Forbes highlights that with this storytelling. Nevertheless, what Forbes also does is make the characters question it.

The characters are, for the most part, well-constructed. There are times when they sound rather whiney to the point of annoyance, but they far between. However, if not for the tension of the story and the pacing, these characters would come off more two-dimensional. The plot and conflicts that arise within them bring the characters to life rather than the other way around. Even the princesses, well while some of them have exciting voices, the idea of pitting them against one another to win the king’s hand is somewhat cliché. While it is a bit of a turn-off, but when these characters do bond, it is something that takes the readers’ breath away because it shows solidarity even in the darkest of times.

However, Mayana does tend to come off as a Mary Sue caricature. I only say that because of her inner conflicts, they do not seem like real conflicts to the reader. She refuses to participate in the sacrifices and believes the teachings to be manmade, orchestrated by the temple to give order to the people, and while that is all great, her tone, her narrative, makes her sound like a know-it-all. There are not enough flaws in her character to make her connect to the reader.

Nevertheless, it was an exciting novel to read and the ending was genuinely gripping. The pace, the attention to detail, it gives the reader something to look forward to even if they sometimes find themselves struggling to connect to the characters. 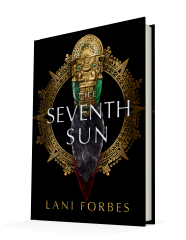 0 thoughts on “Review of ‘The Seventh Sun’”