The Mermaid, the Witch, and the Sea is both wonderfully unique and brilliantly written.

Written by Maggie Tokuda-Hall, the novel explores the life of a desperate orphan turned pirate and a rebellious imperial daughter as they find themselves on the high seas. Together they form a connection and seek to free a mermaid and return her to the sea.

The premise itself is lovely as it works to build this magical world divided by colonialism. It shows the hardships felt by colonialism and the cruelty unleashed by it in both stark and subtle detail. Tokuda-Hall allows the reader to use their imagination, inspiring great emotion in the reader.

Tokuda-Hall’s magnificent writing style shows the reader the fantasy and magic versus telling them. Using subtle language and detail, she creates a beautiful world full of hardships without losing the magic and fantasy. Tokuda-Hall allows the readers’ minds to imagine both the worst and the best, highlighting the dangers these characters face.

However, amid the detail and storytelling, Hall inserts these interludes to break up the story. Both lyrical and mesmerizing, these scenes breathe magic into the sea and give it life and personality.

The same can be said for the characterization.

The Mermaid, the Witch, and the Sea bring Florian/Flora and Evelyn to life wonderfully. Both characters come from different backgrounds, but they bring out the best in one another. Moreover, the way they grow on their journey together make them better characters.

Evelyn is a fierce character who yearns to be true to herself and go against social standing. She befriends her servants and the pirates, such as Florian, who is female by birth but a male on the pirate ship.

One of the best things to come out of this novel is the devotion to their relationship and dynamics.

Hall devotes much time exploring who these characters are from where they came from. But Hall also explores who they can become.

Florian discovers their true self as they come to terms with the grief of their past and the resentment they have come to feel with having to take care of their older brother. Evelyn, too, must come to terms with her hardships and grows stronger because of it.

Both characters grow exponentially throughout the novel, and the ending result leaves the reader enthralled in both the magic, the fantasy, and the characters themselves.

The Mermaid, the Witch and the Sea 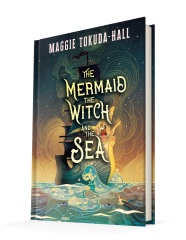