The Court of Miracles tells a story of Les Misérables in a new light. Following Nina of the Guild of Thieves as she embarks on a treacherous journey to save her sisters from the Tiger, the ruthless lord of the Guild of Flesh.

Marketed as a retelling of Les Misérables, this novel has limited references to it. Instead, it uses elements from the classic tale by Victor Hugo. Grant uses some characters and plot devices to broach the similarity, but The Court of Miracles is entirely its own tale. The approach at storytelling is part of what made this novel unique and compelling. As much as I love retellings, it gets tiresome to see the same story retold in almost precisely the same way.

Grant steps away from the formula and instead brings to life her own story. Grant has put thought into the story and the reader can see it with the introduction of the Guilds and their Law. These guilds rebel against the merciless regime in their own ways while also holding them accountable when others refuse.

The structure of the underworld society is exceptionally done. It is easy to imagine this world of 1828 Paris, to see how the Guilds help each other and help the destitute.

Grant also makes sure that the fluidity of the story remains. There are time jumps in the story, which at times are unclear. But instead of being distracting, they add fuel and tension to the story. From the beginning, Nina has had a purpose and to see time pass and her focus sharpen as her thieving skills make for a compelling read. Furthermore, it highlights just how formidable and thoughtful Nina is as a character.

As far as characterization goes, Nina is remarkable. Nina has gone through such a journey, growing up in a world of crime with honor. While a thief, she has a code, she recognizes what is wrong in the Court, and seeks to rectify it. That is what makes her formidable, the lengths at which she goes to save the people she loves, but also to bring down the Tiger and his sex slavery ring. Nina is thoughtful, calculating, and compassionate, ultimately making her a wisest character.

A compelling narrative of 19th century Paris, The Court of Miracles entices the reader with high stakes tension and incredible storytelling.

The Court of Miracles 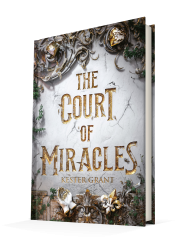