Curse of the Divine delves deeper into the origin of Diavala, focusing more on character development and inclusion.

The language is the first thing that struck me and an improvement over the previous novel. Smejkal was more thoughtful in her word choice and her inclusion of the LGBTQ community. The writer was more realistic and more human, more relatable to the reader rather than off-putting.

Curse of the Divine flows better. The language is more precise, and the scene structure is more engaging and imaginative. There were times the world-building was reminiscent of Lewis Caroll’s Alice’s in Wonderland. There is chaos and disorder, and Halcyon is reminiscent of the Queen of Hearts. However, it is a darker and richer fantasy that pushes the imagination and pushes the characters to their limits.

Celia is richer in the novel. In Ink in the Blood, Celia was lost within herself. Smejkal introduces her at a tavern with her top hat. Celia still has her top hat, but she is also freer. Weighed down by the part she played in her best friend’s death, Celia searches for meaning in her new life with Griffin, her Plague Doctor. That brings her to Halcyon, where she is tempted by the one thing she always resented, the mystical ink.

Her personality changes, gradually, but in a refined and believable way as she learns of Diavala’s origins and Halcyon’s part in her death. Celia opens her eyes and learns to let go of her guilt, anger, and resentment, becoming a better and stronger person.

The same goes for the Plague Doctor. It is so easy to imagine these two characters, but what is more interesting here is that Griffin, being possessed by Diavala, has a chance to shine with his narrative. I found the Plague Doctor to be tedious in the previous novel. I was unsure of his growing relationship with Celia and saw little personality come from him. He was just there.

However, now he has personality. The reader gets to see inside his mind. He is more relatable, more compatible with the reader as the story goes on.

Furthermore, through him, the reader also gets to understand and relate to Diavala. She is no longer the antagonist of the novel, no longer this angry Divine. Moreover, it changes the readers’ perception of her as the story develops, as her relationship with Griffin and Celia changes and grows.

Curse of the Divine 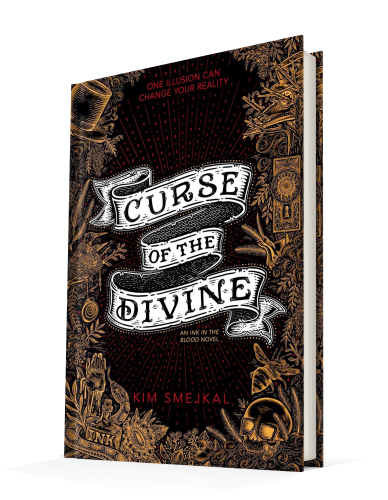