The second novel in the Aurelian Cycle, Flamefall, follows Annie, Lee, and Griff through the sparks of a revolution.

Flamefall picks up right where Fireborne left off, following Annie and Lee as they reckon with the knowledge that Lee was never supposed to survive the revolution. It does create some tension between the characters because the regime is falling into the traps the previous regime did. Food is scarce, so there is a rationing system based on the metals system of the previous novel. It is this metal system has given rise to inequality between the classes.

For Lee, this strikes a nerve, knowing what it means to be on both sides of the coin. Furthermore, as Firstrider, Annie is caught between what needs to be done and what is needed.

The tension highlights how far these characters have come since the beginning of the series. The events here also challenge the characters and the dynamics, giving them complexities to drive the story forwards. Every moment of the story, every challenge they face forces them to reckon with whom they have become and whom they want to be. Both want to be better and want to give their country and people equality, but the way they both go about achieving their goals creates tension and often puts them at odds.

Flamefall also introduces a new narrative, Griff. Griff is a lowborn rider of New Pythos, home to the exiled royals and nobles. Griff had Julia to protect him from her brother, but now with her dead, the realization of his position dawns on him. He understands that he is expendable, but at what cost.

The seeds of revolution stir within him, and he discovers that he is willing to do what he needs to save himself and his people from tyranny.

Munda has the perfect balance of storytelling and characterization to keep the story engaging. The politics, the rationing, the seeds of revolution are well thought out and captivating. Munda focuses on the effects on the people through the character’s perspective and the turmoil in their homes.

It does offer readers a thoughtful narrative because they see how this new regime fell into complacency. They removed the tyrants, but now what does that mean? The fight for equality never ends, mainly because there will always be greedy people, so there needs to be a checks and balances system in place.

Flamefall is a fantastic sequel. Munda carefully develops the characters through tension and perspective. These are characters the reader can relate to and a plot they can get sucked into. 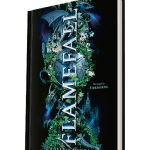