Contest of Queens creeps onto the edge of a retelling of Jack and the Beanstalk. However, it is more about feminism, challenging government abuse of power, and the prejudices that come from social status.

I will admit that the story does have a slow start. It sets up the world and the different classes. First, there are the Upperites who live above the cliffs, above the clouds. They would be considered an upper-class society. Then there are the Lowrians, those who live below the cliffside. There is little contact between the two peoples, and both have formed a somewhat prejudiced opinion of one another.

But Conner, or Prince Cornelius, has always wanted to bridge the gap between the two people, sending A small boat down the cliffside river. And you should find it but Jacqueline. So in response, Jacqueline uses her imaginative thoughts to build a first-ever hot air balloon to send up her message, and I think it’s ingenious of Bartlett to give the ingenuity to the female characters.

That’s something that carries on throughout the entire narrative of the story. Women have the power here; there is the queen’s council, which comprises solely of women. Not only that, but there are no male knights or guards either. Those roles belong, again, solely to women. Contest of Queens is a queendom, but one does fully grasp that concept, the decisive role reversal until halfway through the book, which is incredibly interesting and unique.

There is also a lot of Orwellian themes in the story. When the queen is assassinated on her visit to the lower realm, Jacqueline’s hometown, the king and council take ruling their government to a whole other level. The government is punishing the entire lower domain for the actions of a few, and grief-stricken Connor fails to see how the King and the Council are abusing the lower realm. However, Jacqueline sees it as she tries to communicate to Connor but he doesn’t read her messages. He is angry, angry at everyone. The reader understands why he’s mad; he watched his mother assassinated in front of him, so Connor takes it out on Jacqueline the only way he knows how by ignoring her.

So what begins is what you would call omnipresent government surveillance. You might be familiar with this concept from George Orwell’s 1984. They insert scrying crystals into every house and have them register every member of the household. This is so they can check up on and listen to anyone at any time. It is a blatant violation of privacy and a shameful show of power. There is also the fact that to compete for the Queendom; one must be from the Upper Realm. So there is no voice for the lower realm, which forces Jacqueline to challenge both practices by sneaking up to the upper domain and competing in the contest of queens.

Contest of Queens Is a very engaging novel. Yes, probably that first quarter, as the author establishes the relationship between Jacqueline and Cornelius, it is a little slow, but it offers the reader much worldbuilding. It gives the reader a world in which to ground themselves, and you see how this story began, kind of like a Jack in the Beanstalk retelling. The feminist approach to the storytelling someone ISM is not a unique concept, but the way that Bartlett was able to bring it about was different. It was unique. I don’t think I’ve read something like that before, and I have to applaud her.

It was a creative novel. I am looking forward to the second one. All I can say is that I have to recommend it. A well-written story, Contest of Queens, does capture the readers’ attention. It has strong worldbuilding, good history, and a strong feminist approach to societal economics. I also love how it plays with being both a monarchy and a democracy, giving the Queendom some depth. 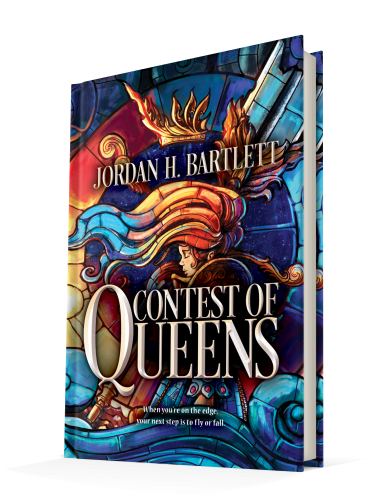