BLOGGER NOTE: It’s T.O.P, can we blame anyone for not being captivated by him?  He’s a gorgeous god!  Simply voicing my opinion.  He should also wear less clothes…hehehe. 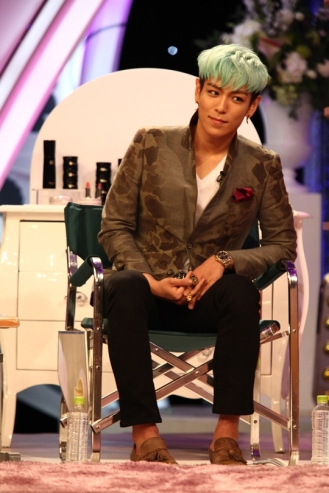 TOP, who is “#1 man who noonas want to date,” featured as the third guest on SBS “GO Show.”

On “GO Show,” TOP was able to capture the heart of Go Hyunjung, showing off his special ability.

In this broadcast, TOP sat on Go Hyunjung’s lap as soon as he entered and surprised the audience with this sudden action. He also mentioned sweetly his thoughts of seeing Go Hyunjung. He also did a stare battle with Go Hyunjung, because TOP is considered to have a strong stare, after he talked about how during filming, his co-star panicked because of his stare while acting.

Go Hyunjung was sure to confirm that TOP has the ability to captivate noonas.
“GO Show” will be broadcasted at 11:05PM on the 20th.

An Extra fro Big Bang: Big Bang is featured on the homepage of SBS.  (WINNING!)