Hello there, avid readers! I hope everyone is having a wonderful time today. I’m making time for reading as much as possible whenever I have a spare moment and I hope you are too. More importantly, I’m making sure to read to my son whenever possible. 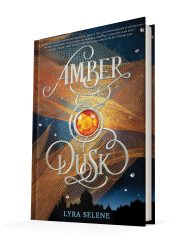 Sylvie has always known she deserves more. Out in the permanent twilight of the Dusklands, her guardians called her power to create illusions a curse. But Sylvie knows it gives her a place in Coeur d’Or, the palais of the Amber Empress and her highborn legacies.

So Sylvie sets off toward the Amber City, a glittering jewel under a sun that never sets, to take what is hers.

But her hope for a better life is quickly dimmed. The empress invites her in only as part of a wicked wager among her powerful courtiers. Sylvie must assume a new name, Mirage, and begin to navigate secretive social circles and deadly games of intrigue in order to claim her spot. Soon it becomes apparent that nothing is as it appears and no one, including her cruel yet captivating sponsor, Sunder, will answer her questions. As Mirage strives to assume what should be her rightful place, she’ll have to consider whether it is worth the price she must pay.

After a perilous journey on the yellow road, Dorothy, Darius, Reo, and Kevvan have finally arrived in Emerald City. But instead of finding the solution to their problems, an unpredictable revelation throws a wrench in their plans.

Without hopes to return home, Dorothy decides to use the little time she has left to help free the land of Oz from the clutches of the Raven Witch.

Her decision sends Dorothy on a dangerous mission that will challenge everything she believes in, and it will make her doubt her own heart.

*Disclaimer: Magic Void is not a standalone novel. It follows the events of Lost Horizon. Oz in Space is a space fantasy reverse harem romance series.