Muse rewrites history by going back to the American Revolution, reestablishing a monarchy instead of a democratic government.

Fast forward to 1893 to the Worlds Fair. It is highly creative to see how Cavallaro reinterprets the facts and gives them new life by giving readers a prologue that shows a nation’s different birth.

Muse has a slow pace once it establishes the world, but it does give readers an exciting outlook on the world. In a word, it is interesting to see this new outlook on the world; this new history brought to life. Nevertheless, as much as the story is about the First American Monarchy, it is also about Clair navigating this world while at the same time trying to escape her delusional and abusive father.

Through Clair, Cavallaro expands her world-building without losing pace. Again, it is not a fast-paced story, but it is not slow either. It is a steady pace as if the reader is taking a leisurely jog around a beautiful lake.

Cavallaro does an exceptional job of highlighting the sexism and injustice of this society. There are no checks and balances, no Parliament, just a monarchy, so there is plenty of injustice going around. The country has turned into the one they fought against.

It is interesting to see how power corrupts and deludes.

What also makes the story compelling is the ingenuity of the storytelling. Cavallaro put much thought into constructing this new history, making it believable while also tackling important immigration issues. It is a brilliant way to highlight xenophobia and relate it to what is going on right now. Bringing up essential issues in literature gives the reader a chance to think, have perspective, and open their minds to make the world a better place.

Clair is a fascinating character, but she is meek in the beginning. Clair’s meekness does not make her a bad character, but when the reader puts her next to her best friend Beatrix, the reader can see both sides of the feminist movement in this novel.

Clair is meek, concerned mainly with her survival. The reader understands her and empathizes with her. However, just because she is initially meek, she is unwilling to side with racist and xenophobic women despite sharing the same beliefs that women are more than just wives and mothers.

Beatrix, on the other hand, shrugs. Her idea is that in the long wrong those problems can be fixed, but Clair is not comfortable putting a lousy person in power because her gender favors her. Clair’s ability to say no and stand up for what is right makes her a strong character; it makes her a woman worth reading about. It also highlights her tremendous growth through the narrative.

Clair goes on an incredible journey in Muse, growing out of her meek shell, shedding it, and becoming a voice of reason and power.

Overall, Muse is a compelling novel. It brings in historical figures such as Tesla and compellingly reinvents history, gripping the reader. Moreover, with a protagonist like Clair, it is empowering as well. 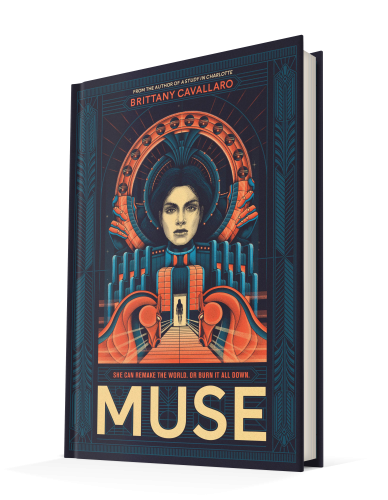